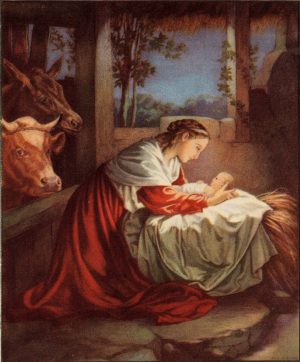 Before we shift from the narrow spotlight of the Holy Family to the growing cast that surrounded the birth of Jesus, Christmas carol writers remind us that this baby was not just special to His mother (Gentle Mary) and father, He was also special to the world that He came to save.

The editors of the Glory to God Presbyterian Hymnal tell us that “This 20th-century Christmas text by an English-born Canadian clergyman was originally a poem called ‘The Manger Prince.’ ” As we sing “Gentle Mary Laid Her Child”, the Holy Child is also revealed as our Lord and King.

Gentle Mary laid her child lowly in a manger;
there he lay, the undefiled, to the world a stranger.
Such a babe in such a place, can he be the Savior?
Ask the saved of all the race who have found his favor.

Angels sang about his birth; wise men sought and found him;
heaven’s star shone brightly forth, glory all around him.
Shepherds saw the wondrous sight, heard the angels singing;
all the plains were lit that night; all the hills were ringing.

Gentle Mary laid her child lowly in a manger;
he is still the undefiled, but no more a stranger.
Son of God, of humble birth, beautiful the story;
praise his name in all the earth; hail the King of glory!

God let me praise the King of Glory as I take my place in the saved of all the race as His faithful disciple. Amen.