Give Thanks, O Christian People ~ Hymn 644 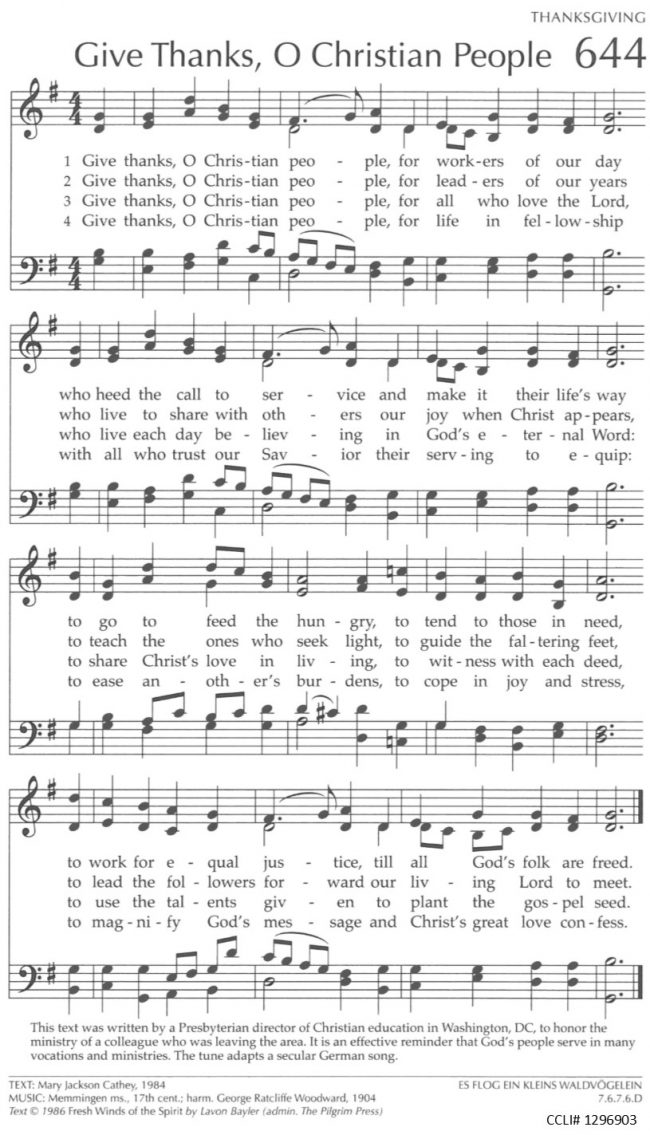 There is a celebrated picture that came to mind as I read the verse from Proverbs 29 and the first verse of the hymn, Give Thanks, O Christian People. I had to do some research on it and as I describe it, the image will likely come to your mind too. The picture is entitled, “Grace,” and it is by Swedish artist, Eric Engstrom (b. 1875; d. 1968).

The background is rather rustic. In the foreground of the picture a white-haired elderly man with a beard sits at a table with his hands clasped, his head bowed, and his eyes closed. He is clad in a heavy green sweater, that suggests his home may be poorly heated. On the table there is a book, perhaps a large Bible upon which are his reading glasses. Also, on the table are a bowl and spoon, perhaps containing some warm nourishing soup and a small loaf of bread with a knife. The man may not have a lot to eat, but he is grateful for what he has

The picture, taken in 1918, is a photograph that was hand colored by the artist’s daughter. It is a deeply moving portrait of a man of faith.

Today’s hymn bids people to give thanks for people who serve in many ways. It was written to honor a church educator, but it also honors those who work for justice and show compassion.

Give thanks, O Christian people, for workers of our day
Who heed the call to service and make it their life’s way
To go to feed the hungry, to tend to those in need
To work for equal justice, till all God’s folk are freed.

O God, it is not enough for us to see people in need, we are to respond to their need, for only as we do so, are we practicing righteousness. In Christ’s name, we pray. Amen.