God Can Do All Things 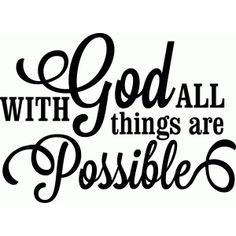 Disagreement Between Paul and Barnabas

Some time later Paul said to Barnabas, “Let us go back and visit the believers in all the towns where we preached the word of the Lord and see how they are doing.” Barnabas wanted to take John, also called Mark, with them, but Paul did not think it wise to take him, because he had deserted them in Pamphylia and had not continued with them in the work. They had such a sharp disagreement that they parted company. Barnabas took Mark and sailed for Cyprus, but Paul chose Silas and left, commended by the believers to the grace of the Lord. He went through Syria and Cilicia, strengthening the churches. Acts 15:36-41

Conflict, can happen anytime and anywhere. Look at these two God-filled men – Paul and Barnabas, they had traveled together preaching the Good News of Christ Jesus and they hit an impasse. Barnabas wanted to take John (also known as Mark) with them as they traveled on preaching the Word of the Lord, but Paul was against it because Mark had left them in Acts 13:13, 13 From Paphos, Paul and his companions sailed to Perga in Pamphylia, where John left them to return to Jerusalem.

This disagreement caused the two great preachers to form two missionary teams, once again reminding us that God can take a negative situation and turn it into good. That’s what He does all the time for you and for me. Now the Gospel could be spread further, with two teams heading out spreading The Word. Of course none of us want to have disagreements, but sometimes that’s what it takes in order for God’s will to be done. It’s important to remember, Christians do not always agree, but problems can be solved by agreeing to disagree and letting God work out His will.

Compassionate Father, sometimes You take a very negative situation and turn it for good when we thought a positive outcome was impossible. But we are learning each and every day that with You, all things are possible. Help us to remember that when disagreements occur, it’s important for us to pray for those who we disagree with, but also trust in You to make the way. Amen.