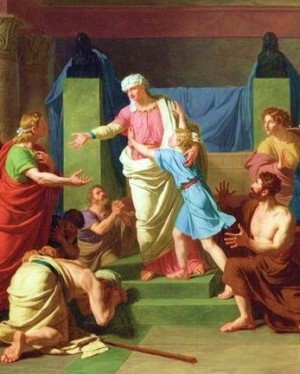 Joseph could stand it no longer. There were many people in the room, and he said to his attendants,” Out, all of you!” So he was alone with his brothers when he told them who he was. Then he broke and wept. He wept so loudly the Egyptians could hear him, and work of it quickly carried to Pharaoh’s palace. “I am Joseph!” he said to his brothers. “Is my father still alive?” But his brothers were speechless! They were stunned to realize that Joseph was standing there in front of them. “Please come closer,” he said to them. So they came closer. And he said again,” I am Joseph, your brother, whom you sold into slavery in Egypt. But don’t be upset, and don’t be angry with yourselves for selling me to this place. It was God who sent me here ahead of you to preserve your lives. This famine that has ravaged the land for two years will last five more years, and there will be neither plowing nor harvesting. God has sent me ahead of your to keep you and your families alive and to preserve many survivors. So it was God who sent me here, not you! And he is the one who made me an advisor to Pharaoh-the manager of his entire palace and governor of all of Egypt. Genesis 45:1-8

This is yet another reason I love the story of Joseph. Not only is it a story of his extraordinary faith, but it is a story of true forgiveness and trust that God has a plan even when we don’t understand. I am certain there were times that Joseph asked God why he had to go through all that he had. In an instant he finally knew. We might not get an opportunity this side of heaven like Joseph to see the reason God does what he does with our lives, but that is where faith comes into play.

The last few chapters Joseph has been consumed with anger, bitterness, and unforgiveness. Plotting to punish his brothers one way or another. Suddenly we see his breakdown and the realization that God truly never left him AND he knew exactly what his plan was. He reveals his identity to his brothers in such a beautiful way. Instantly telling them not to worry or be afraid because it was God who sent him here not them. All so that their lives would be preserved.

Hurt and betrayal like Joseph experienced are very real, raw emotions. Giving forgiveness in times like these is only possible through the power of the Holy Spirit.

Again, we see a story in the Old Testament that is a wonderful example of what God wants us to do with our lives and to seek him in all that we do. Imagine how different this story would have turned out if Joseph were more concerned with payback rather than seeking God and choosing to see his beautiful workmanship. That is all God asks of us each day is that we choose him and choose to see him at work in our lives even through the not so pleasant parts.