God’s Ways Are Not Always Our Ways 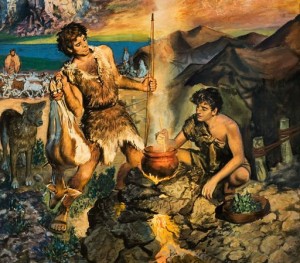 Nature seems to teach us that: large dominates small, many are more powerful than a few, younger serves older. When, however, we read the story of God’s encounters with human beings in the pages of the scriptures, we are gradually taught to see things from a slightly different perspective. One of the first adjustments to our natural mindset comes in the story of Jacob and Esau.

This is the account of the family line of Abraham’s son Isaac. Abraham became the father of Isaac, and Isaac was forty years old when he married Rebekah daughter of Bethuel the Aramean from Paddan Aram and sister of Laban the Aramean. Isaac prayed to the Lord on behalf of his wife, because she was childless. The Lord answered his prayer, and his wife Rebekah became pregnant. The babies jostled each other within her, and she said, “Why is this happening to me?” So she went to inquire of the Lord. The Lord said to her,

“Two nations are in your womb,
and two peoples from within you will be separated;
one people will be stronger than the other,
and the older will serve the younger.”

When the time came for her to give birth, there were twin boys in her womb. The first to come out was red, and his whole body was like a hairy garment; so they named him Esau. After this, his brother came out, with his hand grasping Esau’s heel; so he was named Jacob. Isaac was sixty years old when Rebekah gave birth to them.

The boys grew up, and Esau became a skillful hunter, a man of the open country, while Jacob was content to stay at home among the tents. Isaac, who had a taste for wild game, loved Esau, but Rebekah loved Jacob. Once when Jacob was cooking some stew, Esau came in from the open country, famished. He said to Jacob, “Quick, let me have some of that red stew! I’m famished!” (That is why he was also called Edom.) Jacob replied, “First sell me your birthright.” “Look, I am about to die,” Esau said. “What good is the birthright to me?” But Jacob said, “Swear to me first.” So he swore an oath to him, selling his birthright to Jacob. Then Jacob gave Esau some bread and some lentil stew. He ate and drank, and then got up and left. So Esau despised his birthright. (Genesis 25:19-34)

Before we really even get into the first of the biblical stories of these competitive brothers, we find that their mother is let in on a Godly twist in nature’s plot – “the older will serve the younger”. As the story of Jacob and Esau unfolds, we are shown that in spite of how we think things should go, the act of following God is the greatest predictor of where success in life can be found.

We might want to watch for God’s leading (and their willingness to follow) as we read on in the life of these two brothers. And if we choose to then go further in the Bible, we might see that God leads people to a promised life in spite of the odds against them. (Isn’t that part of the plot in the stories of Joseph and his brothers, Israel (Moses + God) vs. Egypt (Pharaoh), David (+ God) vs. Goliath, The choice of David as King, Daniel (+ God) in the lion’s den, and Jesus vs. the Pharisees/ the Cross /Death Itself?)

But today, it may be enough to know that “Esau – the older – would serve Jacob – the younger”. God’s Ways Are Not Always Our Ways. That may be good.

Teach me to follow as You lead, and to be transformed and blessed as I long to see Your ways and Your will for me. Amen.