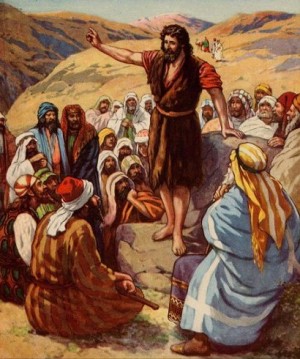 In those days John the Baptist appeared in the wilderness of Judea, proclaiming, “Repent, for the kingdom of heaven has come near.” This is the one of whom the prophet Isaiah spoke when he said, “The voice of one crying out in the wilderness: ‘Prepare the way of the Lord, make his paths straight.’”

Now John wore clothing of camel’s hair with a leather belt around his waist, and his food was locusts and wild honey. Then the people of Jerusalem and all Judea were going out to him, and all the region along the Jordan, and they were baptized by him in the river Jordan, confessing their sins.

But when he saw many Pharisees and Sadducees coming for baptism, he said to them, “You brood of vipers! Who warned you to flee from the wrath to come? Bear fruit worthy of repentance. Do not presume to say to yourselves, ‘We have Abraham as our ancestor’; for I tell you, God is able from these stones to raise up children to Abraham. Even now the ax is lying at the root of the trees; every tree therefore that does not bear good fruit is cut down and thrown into the fire.

“I baptize you with water for repentance, but one who is more powerful than I is coming after me; I am not worthy to carry his sandals. He will baptize you with the Holy Spirit and fire. His winnowing fork is in his hand, and he will clear his threshing floor and will gather his wheat into the granary; but the chaff he will burn with unquenchable fire.”

It doesn’t take long after the story of the birth of Christ in the gospels until things start heating up for the Kingdom of God. Here at the opening of chapter 3 in Matthew, an adult John the Baptist breaks on the scene out in the wilderness. From his leather belt and camel’s hair coat, to his penchant for exotic foods, John seems to fit right into the mold of the Old Testament prophets of God. Just like Isaiah had predicted, John was out there shouting in the wilderness. It’s time to get ready for God’s kingdom to come!

His message was proclaimed to everyone. “Repent.” The word literally means “turn around”.

From my days of attending camps at Cedarkirk, I remember the evening square dances. There was a part in the dance where the caller who say “Going wrong, let’s go right.” On that cue, the whole crowd would reverse course. That’s what happens when the kingdom breaks forth in our lives. We are invited to stop, ponder where we might be going wrong, and in the power of the Spirit, turn and start going right.

God’s kingdom is indeed at hand, are we turning in order to go with it?

God, as I live each day as one of your children, help me to consider my path in following Jesus. Guide me in the right direction, so that I might enjoy the kingdom in it fullness. In Christ’s name I pray. Amen