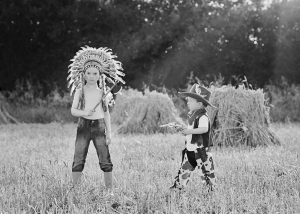 Do not envy the wicked, nor desire to be with them; for their minds devise violence and their lips talk of mischief.
Proverbs 24:1 (NRSV)

Do you want to be one of the good guys or the bad guys? That was a question we boys, asked as we prepared to play cowboys and Indians, Sheriff or Marshall with posse and outlaws or cops and robbers. It seemed that many times we wanted to play the bad guys … we thought they had the best parts in our little action dramas.

As actors and actresses have been interviewed, they too often like to play the bad guys or villains. They sometimes feel that these roles stretch them. For others it’s a departure for them and an opportunity to escape being stereotyped if they have largely been playing “good guy” roles. I have heard that for others the “bad guy” role helps them get in touch with their dark side. In both of these situations, I have been speaking of acting a part rather than living that way.

Proverbs 24:1 warns us neither to envy the wicked nor to desire associating with them. We are told that their minds devise violence and their lips talk of mischief.

When playing bad guys we used toy guns or weapons and not something that could injure, maim, or kill anyone. We might have wanted to be a “bad guy” because our best friend or other playmates were going to be in those roles. If we “killed” someone then he would have fallen to the ground or slumped over, but in time he would get back up. The next time he or we might be playing “good guys.”

O Lord, remind us daily to be good stewards of our wealth. Free us from being selfish. Inspire us to make a difference in people’s lives and to be on the lookout as to how we may show the love and compassion of Christ each day. In His name, we pray. Amen.