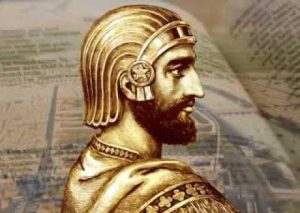 “Nadab, son of Jeroboam, began to reign over Israel in the second year of King Asa of Judah: he reigned over Israel two years. He did what was evil in the sight of the Lord, walking in the way of his ancestor and in the sin he caused Israel to commit.” I Kings 15:25-26

Time and time again we read, “He did what was evil in the sight of the Lord.”

“Jehoiakim was twenty-five years old when he began to reign; he reigned eleven years in Jerusalem. He did what was evil in the sight of the Lord his God. Against him King Nebuchadnezzar of Babylon came up. …” II Chronicles 36:5-6a

King Nebuchadnezzar had the temple destroyed, the worship vessels confiscated, the king bound, and the people taken away to live in exile in Babylon in 586 BC. Their life there was miserable as Psalm 137: 1 attests. “By the rivers of Babylon – there we sat down and there we wept when we remembered Zion.”

In 538 BC, God would redeem His people and his instrument would be a foreign king, Cyrus, King of Persia. He would allow God’s people to return to their homeland and to rebuild the temple. Cyrus was a good, albeit foreign, king, who did what was right in the sight of the Lord.

Dear God, we thank You for Cyrus of Persia who proved to be a good king – to allow Your people to return home and to rebuild the temple. Keep us mindful that You can use people we might never expect to do what is pleasing in Your sight. Help us to live our lives in faithful obedience to You. In Christ’s name, we pray. Amen.