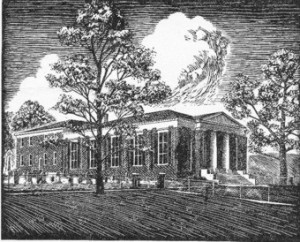 For the word of the Lord has sounded forth from you not only in Macedonia and Achaia, but in every place your faith in God has become known, so that we have no need to speak about it. I Thessalonians 1:8 (NRSV)

During the summer of 1983, I spent twelve weeks as an intern at New Providence Presbyterian Church, outside of Raphine, Virginia. The church was pre-Revolutionary War, having been organized in 1746. Though not exactly a “city” boy, I certainly was a “town-ee,” and I had never lived out in the country. The church was rather large for a rural congregation. I had already been selected to serve as a page at the General Assembly in Atlanta, which would reunite the Presbyterian Churches (UPCUSA and PCUS) to form the PCUSA. Unfortunately, there was a schedule conflict and I had to relinquish my spot as the church needed me to help with their Vacation Bible School. I was sad about missing that experience, but I knew that my summer internship and remaining in sequence with my class were important.

I enjoyed my time at New Providence … preaching, teaching, and doing pastoral care as well as working with the youth. I met some wonderful folks, who were really the “salt of the earth.” Upon my return to Columbia Seminary in Decatur, Georgia, I began to hear rumblings that I might receive the Indiantown Country Church award. This prize was presented annually to a seminarian who had served in a rural setting. There was a cash prize and indeed I was the recipient that year. With that prize money and some savings, I was able to purchase my first clerical robe. I heard the good news before the honor and prize were conveyed!

Paul, Silvanus, and Timothy had been instrumental in forming the church at Thessalonica. Along their travels they had heard good reports about the Thessalonians. They remembered their work of faith, their labor of love and steadfastness of hope in the Lord Jesus Christ. Paul and company were convinced that God had chosen the Thessalonians. They recalled how the Thessalonians had gladly received God’s Word and been empowered by the Spirit. They had been so exuberant in sharing their faith in Macedonia and Achaia, that Paul and company had no need to share “their success story” of having ministered among them their response to the Gospel. People knew the Thessalonians were Christians by their words and deeds! Can that be said of me? Can that be said of us?

O Lord, do people recognize us as being imitators of You and of other faithful Christians? What kind of examples are we? Lord, we know that we are not what we should be, but by Your grace and mercy help us to become such radiant Christians that we are known by both our words and our deeds. In Jesus’ name, we pray. Amen.