Grace to You and Peace 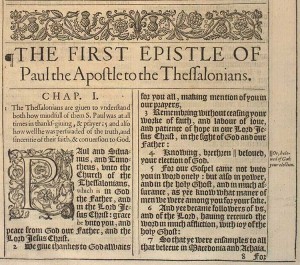 What a wonderful greeting. Grace to you and peace, I’m sure are what we all wish for one another. Especially in this day, a day where it seems as if more people are more concerned about their own peace and grace, than others who may not even be known. The introduction to Paul’s first letter to the Thessalonians is extremely warm and friendly. In a time of change and uproar, the Thessalonians were blest with a loving faith of The Loving Father.

According to the introduction from my Bible, Thessalonica was the capital of the Roman province of the Roman province of Macedonia. A very important province found here in the land Rome claimed and ruled over. Paul, who was the main missionary of the followers of Christ, came to this area and was able to gather and form a congregation of faithful followers. Because of their enthusiasm and commitment to the Risen Christ, he and they formed the first Christian gathering in this area of the great Roman Empire.

There are five chapters in this first letter Paul wrote to the followers of Thessalonians. I would encourage you to sit down and read through the entire letter and then read a chapter a week over the next five weeks. As you read, go slowly, taking time with this letter which offers repeated encouragement toward growing your faith upward to God the Eternal Father.

Heavenly Father, as we are able to read this letter of faith and encouragement, we are blest with the newness of our faith. To think that Your Holy Presence was with the followers in a land that in faith grow daily in hope for a better tomorrow. In Christ, our Lord and Savior, we pray. Amen.