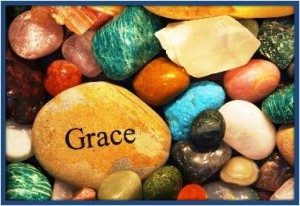 And the Word became flesh and lived among us, and we have seen his glory, the glory as of a father’s only son, full of grace and truth. (John testified to him and cried out, “This was he of whom I said, ‘He who comes after me ranks ahead of me because he was before me.’”) From his fullness we have all received, grace upon grace. The law indeed was given through Moses; grace and truth came through Jesus Christ. No one has ever seen God. It is God the only Son, who is close to the Father’s heart, who has made him known.
John 1:14-18

When you want to emphasize something, it helps to repeat it. What word do we find repeated in this section of scripture from John’s gospel? Grace. It’s there 4 times in 5 verses. It is mentioned twice in one line. Grace. It seems that coming of the Word, God’s own Son, was all about grace.

One of my favorite Christian authors, a Presbyterian Minister named Frederick Buechner, shares this definition of the word GRACE:

After centuries of handling and mishandling, most religious words have become so shopworn nobody’s much interested anymore. Not so with grace, for some reason. Mysteriously, even derivatives like gracious and graceful still have some of the bloom left.

Grace is something you can never get but can only be given. There’s no way to earn it or deserve it or bring it about any more than you can deserve the taste of raspberries and cream or earn good looks or bring about your own birth.

A good sleep is grace and so are good dreams. Most tears are grace. The smell of rain is grace. Somebody loving you is grace. Loving somebody is grace. Have you ever tried to love somebody?

The grace of God means something like: “Here is your life. You might never have been, but you are, because the party wouldn’t have been complete without you. Here is the world. Beautiful and terrible things will happen. Don’t be afraid. I am with you. Nothing can ever separate us. It’s for you I created the universe. I love you.”

There’s only one catch. Like any other gift, the gift of grace can be yours only if you’ll reach out and take it.

Maybe being able to reach out and take it is a gift too.

(originally published in Wishful Thinking and later in Beyond Words)

Gracious and loving God, thank You, that in Jesus’ coming into the world and coming into my life, I have received grace upon grace. Amen.