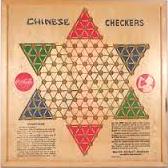 It isn’t a toy – – – -It is a game! How and when it was acquired, I do not know. It could have been given for a birthday or Christmas gift. My portly grandfather liked to play this game with the board on his lap so he could see the board better. (and he was good!) He enjoyed playing with the grandchildren. The game was Chinese Checkers!

The grandchildren devised a plan to win more games. The moment he was distracted, the board was pushed toward him so he could not see the last marble. Then the grandchildren would tease him for losing the game. He would act mad and say “He was not going to play with us anymore”, but it wasn’t long before you would hear him ask “who wants to play a game of checkers”. All was forgiven!

We all had fun.

O God, Jesus, Mary and Joseph constituted a family and no doubt there were other relatives “in the wings.” We thank You that Christmastime is a time for families. We thank You for the good times we have enjoyed and for the support of family during difficult times. We thank You that love and forgiveness bind families together. In Christ’s name, we pray. Amen.