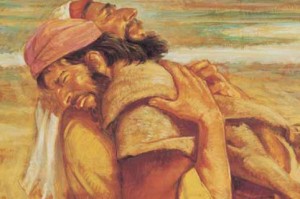 “But Esau ran to meet him, and embrace him, and fell on his neck and kissed him, and they wept.” Genesis 33:4 (NRSV)

Between the years of youth and adulthood, how often had Jacob been plagued with the nagging pangs of guilt from cheating his brother Esau out of his birthright and his father Isaac’s blessing? He was old enough to know right from wrong. What Jacob did to his brother was wrong and while Jacob had become prosperous, he began his climb to affluence by stealing what rightfully belonged to Esau.

Between the years of youth and adulthood, how often had Esau envisioned what he might do to exact revenge on Jacob for his treachery? He relived those moments when he exchanged a bowl of lentil stew for his birthright and how he should have declined Jacob’s proposition. He regretted that he was delayed in bringing his father, Isaac some savory game so that Jacob had time to impersonate him and thus trick his father into giving his brother the blessing that was to have been his. Still the years had been good to Esau and he had gained much wealth.

For years Jacob was burdened with guilt and Esau had contemplated how he could get revenge. Both brothers had experienced prosperity. Years have passed since a birthright was sold and a blessing was stolen, and now the brothers find themselves on the same road approaching each other with family members, servants and possessions in tow. Both brothers draw closer, ever wondering how the other one will act toward him. Long standing guilt is met with forgiveness and the revenge that was long anticipated gives way to reconciliation and peace.

But Esau (the offended) ran to meet him (Jacob, the offender). Esau embraced Jacob … fell on his neck … and kissed him. And they (Jacob and Esau) wept! Here we see brotherly love in action! The fraternal twins that were so close in their mother’s womb are now close again … weeping as the brothers embrace and hold each other.

This scene is quite different from the one we see between the Prodigal Son, the Loving Father and the Elder Brother in the parable that Jesus tells. And yet, would this scene not have been a happy ending for that story too?! In our minds, we are always wondering if the Prodigal Son and Elder Brother were ever reconciled. If so, then it is a testimony to brotherly love that can bridge what alienates family members and a reminder that familial relationships are important and worth salvaging or restoring.

Loving Father, we confess that guilt and revenge are destructive forces in relationships. We acknowledge that love covers a multitude of sins. Forgive us of those things we have allowed to stand in way of our seeking forgiveness and striving for reconciliation. Help us to amend our ways by loving one another and remembering that we cannot love You whom we have not seen if we do not love our brothers and sisters, whom we have seen. In Jesus’ name, we pray. Amen.