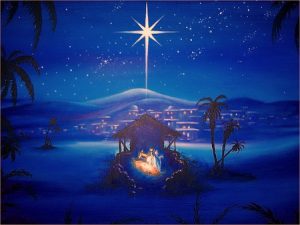 During the season of Christmas – the nights are just as important as the days (if not more so.) The nights are longer this time of the year, and there are some very significant nights. New Year’s Eve is noted on every calendar, and so is Christmas Eve. It’s a season that treasures nights.

The music of the season reflects this focus. Of the sacred Christmas songs, it seems to me that “Silent Night” may be the most popular. This song has been recorded by nearly every artist who focuses on the message of Christmas. On the CDs I have collected, I have three favorite renditions of this beloved carol. Mannheim Steamroller has a beautiful instrumental version of Silent Night. The more eclectic collection of holiday music entitled This Warm December includes Zach Gill with a simple guitar and vocal solo that is most welcome in this combination of sacred and secular songs of the season. And then on A Christmas Together (John Denver and the Muppets), the story behind this carol is shared.

According to tradition, on December 24, 1818, Joseph Moore, the curate of a small parish in Austria gave a poem he had written to Franz Gruber, the choirmaster and organist at the church. The church organ was broken, and Pastor Moore asked Mr. Gruber to set his poem to music, for guitar and two solo voices, so that they would have music for their services that night. Their creation was the carol we now know as Silent Night.

The Christmas story and season would not be complete if we didn’t take time to ponder what happened on that silent night.

In that region there were shepherds living in the fields, keeping watch over their flock by night. Then an angel of the Lord stood before them, and the glory of the Lord shone around them, and they were terrified. But the angel said to them, “Do not be afraid; for see— I am bringing you good news of great joy for all the people: to you is born this day in the city of David, a Savior, who is the Messiah, the Lord.

On a special night, our Savior came to us. By the light of a star that shone that night, wise men in a far land also sensed that something incredible had happened. Thanks be to God for wonderful nights.

God, as the sun sets this day, help me to look to the sky in praise to You for this spectacular creation, and my place in it, as one redeemed by the Savior who has been born on a silent, holy night. Amen.