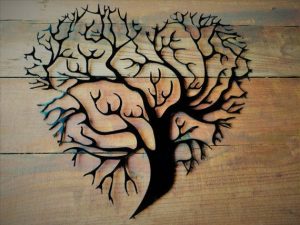 Jesus was about thirty years old when he began his work. He was the son (as was thought) of Joseph, son of Heli … son of Enos, son of Seth, son of Adam, son of God.
Luke 3:23

Today we look at Heli. All we know of him is found in this one verse in the Gospel of Luke. He was the father of Joseph. (Luke 3:23)

In the genealogy of Jesus according to Luke, we find the familiar names: David, Abraham, Noah, Seth, and Adam. He also includes obscure relatives such as: Matthat, Esli, Arni, Perez, and Terah. He finally traces Jesus’ genealogy back to God.

As we examine the people in our family trees, we will find some who have become notable and others whose names are just mentioned. Our genealogies are that much like Jesus’ family tree! Once we are baptized we are declared to be children of God too! As we trace our heritage we may discover a famous or notable name or two and there may be many more names that are just mentioned and that are obscure.

There were a number of names on that family tree and Heli was but one, but he was listed between God and Jesus. We must admit that he could not have been in any better company. As we become part of God’s family through baptism … we become God’s children and Jesus is our elder brother. Whether we become famous or are merely mentioned in our respective genealogies, we too cannot be in any better company. Thanks be to God!