How Do You Feel? Embarrassed? 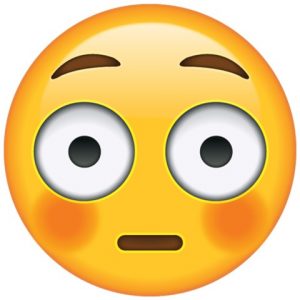 3 Now the serpent was more crafty than any other wild animal that the Lord God had made. He said to the woman, “Did God say, ‘You shall not eat from any tree in the garden’?” 2 The woman said to the serpent, “We may eat of the fruit of the trees in the garden; 3 but God said, ‘You shall not eat of the fruit of the tree that is in the middle of the garden, nor shall you touch it, or you shall die.’” 4 But the serpent said to the woman, “You will not die; 5 for God knows that when you eat of it your eyes will be opened, and you will be like God,[a] knowing good and evil.” 6 So when the woman saw that the tree was good for food, and that it was a delight to the eyes, and that the tree was to be desired to make one wise, she took of its fruit and ate; and she also gave some to her husband, who was with her, and he ate. 7 Then the eyes of both were opened, and they knew that they were naked; and they sewed fig leaves together and made loincloths for themselves.

8 They heard the sound of the Lord God walking in the garden at the time of the evening breeze, and the man and his wife hid themselves from the presence of the Lord God among the trees of the garden. 9 But the Lord God called to the man, and said to him, “Where are you?” 10 He said, “I heard the sound of you in the garden, and I was afraid, because I was naked; and I hid myself.” 11 He said, “Who told you that you were naked? Have you eaten from the tree of which I commanded you not to eat?” 12 The man said, “The woman whom you gave to be with me, she gave me fruit from the tree, and I ate.” 13 Then the Lord God said to the woman, “What is this that you have done?” The woman said, “The serpent tricked me, and I ate.”

You ever get caught with your pants down? We all know what it is to feel embarrassed. It happened to Adam and Eve and it can happen to us.

Adam and Eve were embarrassed that God had discovered their sinful behavior. They had done the only thing that they had been told not to do in the garden. And as soon as this sin was pointed out, in their self-centeredness they started pointing fingers of blame at anyone and everyone.

Sometimes we are embarrassed as someone points out something that we can’t control or cover up. Shame on them for hurting us. Maybe we will be more gracious in our exposing the faults of others. And then again, when we are embarrassed, we might want to ask if our own behavior had set us up. And if so, maybe we need to pray for the wisdom and strength to change.

God, help me to live in such a way that my own actions won’t be an embarrassment to me or to You. Amen.