How the Grinch Stole Christmas (1966) 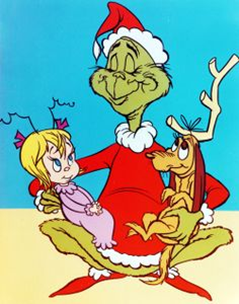 “The light shines in the darkness, and the darkness did not overcome it.” John 1:5 (NRSV)

How the Grinch Stole My Heart

I grew up as a child of the 1960’s. The color television set in our family’s living room was a very significant piece of furniture. The shows that were shown on that TV left a lasting impression on me. One of the shows only aired in the holiday season, and until the advent of VCR’s, I made a point to be settled in front of that TV on the one night each year when it was broadcast. How the Grinch Stole Christmas has long been a part of my celebration of the season. The classic 30-minute cartoon was produced in 1966. I first become enamored with the Grinch on TV, and then soon obtained my own print copy of Dr. Seuss’ work. Over the years I have worn out a VCR recording (having now moved onto DVD) and treasured my old book.

If you don’t know the story, it is fairly simple. The Grinch (“and no one quite knows the reason”) hated the Whos down in Who-ville. They celebrated life and loved freely. After years of his sour disdain, the Grinch decided to try and steal their joy at the Christmas season by dressing as Santa Claus and taking their toys.

After stripping their town and their homes bare of all of the trapping of Christmas, the Grinch waited to hear their wailing. But the sound that he heard from the Whos “wasn’t sad, it was glad.” And the Grinch finally realized that “Maybe Christmas doesn’t come from a store. Christmas perhaps means a little bit more.” That’s something we children of the 1960’s needed to see and hear. And the message hasn’t seemed dated when I read it to my children in the 1980’s, or re-read it and enjoy watching the Grinch’s transformation every single year. If you know the cartoon, I can tell you exactly the moment where the Grinch steals my heart each year: “When the true meaning of Christmas comes through – and the Grinch gets the strength of ten Grinches, plus two.” That’s where the goose bumps move to a lump in my throat and a tear or two in my eyes.

Granted, this story is not the Christmas story, but The Grinch reminds me again and again to push aside the trappings, the wrappings, the busy-ness of the season, so that I can get to the real meaning of Christmas. It doesn’t come from a store, Christmas is a whole lot more, as it shines in the Christ of Christmas.

Help me, Giver of the best gift, to know the source of the joy of Christmas. Let me look past the packages and boxes and bags to the treasure that You offer us in this season. In Christ’s name we pray. Amen