I Swear It Was the Spirit 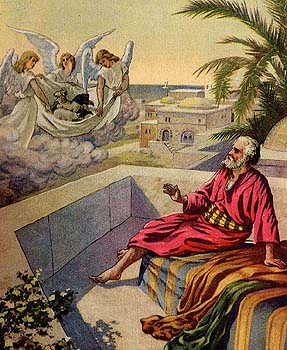 We have come to the point in Acts when things are about “to hit the fan.” The early followers of Jesus, who was seen by many as a first century Jewish teacher, were mainly Jewish. And being seekers after God’s direction in their lives, many of the first disciples, like Peter, followed the Jewish laws (which we find in the Old Testament in our Bibles) very closely. The Jewish laws talked about cleanliness in terms of the pots and pans that were used to prepare food, the foods themselves, and people. In chapter 10 of Acts, we read a story about Peter and what he thought was a dietary discussion with God.

Peter recounts the whole episode when he was called to account to the leaders in the church in Jerusalem.

Now the apostles and the believers who were in Judea heard that the Gentiles had also accepted the word of God. So when Peter went up to Jerusalem, the circumcised believers criticized him, saying, “Why did you go to uncircumcised men and eat with them?” Then Peter began to explain it to them, step by step, saying, “I was in the city of Joppa praying, and in a trance I saw a vision. There was something like a large sheet coming down from heaven, being lowered by its four corners; and it came close to me. As I looked at it closely I saw four-footed animals, beasts of prey, reptiles, and birds of the air. I also heard a voice saying to me, ‘Get up, Peter; kill and eat.’ But I replied, ‘By no means, Lord; for nothing profane or unclean has ever entered my mouth.’ But a second time the voice answered from heaven, ‘What God has made clean, you must not call profane.’ This happened three times; then everything was pulled up again to heaven. At that very moment three men, sent to me from Caesarea, arrived at the house where we were. The Spirit told me to go with them and not to make a distinction between them and us. These six brothers also accompanied me, and we entered the man’s house. He told us how he had seen the angel standing in his house and saying, ‘Send to Joppa and bring Simon, who is called Peter; he will give you a message by which you and your entire household will be saved.’ And as I began to speak, the Holy Spirit fell upon them just as it had upon us at the beginning. And I remembered the word of the Lord, how he had said, ‘John baptized with water, but you will be baptized with the Holy Spirit.’ 17 If then God gave them the same gift that he gave us when we believed in the Lord Jesus Christ, who was I that I could hinder God?” When they heard this, they were silenced. And they praised God, saying, “Then God has given even to the Gentiles the repentance that leads to life.” Acts 11:1-18

As I read on in Acts (and read it again and again) what wonderful things is the Spirit saying through God’s word?

Open my mind, dear God, to hear you speak in the fullness of your word. Help me hear you speak with power about your place in my life even today. In Jesus’ name I pray. Amen.