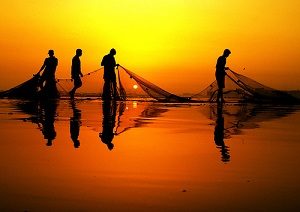 Then Jesus said to Simon, ‘Do not be afraid; from now on you will be catching people.’ When they had brought their boats to the shore, they left everything and followed Him.’
Luke 5:10b-11

There is an old adage about marriage. “Keep both of your eyes opened before marrying and then keep one eye closed.” In other words before making that commitment make sure you know your intended well and then be prepared to close an eye to something you may not have known before marrying. While I have never married, I have tried to put that adage to work for me as I make other commitments. I try to get as much information as I can about a situation before making a commitment.

It had been one of those nights. Simon Peter had fished all night long and had naught to show for it. He wondered why he had chosen to be a fisherman when being a carpenter, a merchant, or some craftsman might have provided more reliable employment. He recognized he would have missed the adventure that came with boating and fishing and he would have missed being outdoors.

Jesus tells Simon, “Put out into the deep water and let down your nets for a catch.” Simon tells Jesus what their experience had been the night before and then he says, “Yet if you say so I will let down the nets.” Simon does Jesus’ bidding. Then it is as if the fish are jumping to get into the boat! Their nets became so full of fish that they were beginning to break. Simon Peter and his crew signaled partners (James and John) in another boat to come and help them. Now there were two boats so filled with fish that the boats were beginning to sink from the weight. Simon Peter fell at Jesus’ feet and said, “Go away from me Lord for I am a sinful man.” All of the fishermen were amazed!

“Then Jesus said to Simon, ‘Do not be afraid; from now on you will be catching people.’ When they had brought their boats to the shore, they left everything and followed Him.” Did Simon Peter have any idea what ‘catching’ people meant? I tend to think not! I suspect he thought to himself if my Master can help me catch a boatload of fish then He can surely teach me how to catch people. I’m not sure I know what I will do with them when I catch them but I trust Jesus will show me the way. Then Simon Peter, and presumably his brother Andrew, James, and John left their boats, nets, and other fishing gear behind as they followed Jesus.

O Lord Jesus, forgive me when I want assurances to do what You call me to do. Help me to trust You when I have doubts. Remind me that You call us to be faithful and to remember that You will not fail or forsake us. In Your name, we pray. Amen.