In Christ is Life 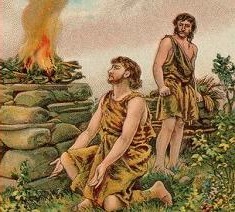 Tell me, do you sense that there is a big serious problem here in the fourth chapter of Genesis? Why else would we find in Genesis this story of Cain and Abel so close to the very beginning of life here on the good earth? After all, the Good Book had just introduced us to Adam and his wife Eve, got them settled in the garden, and in chapter 4.1 we find, “Now the man knew his wife Eve,” and before you know it she not only bore one son Cain but also a second son, Abel.

From this time on what we have are problems, problems which have their roots seen as sins. Sin, which is defined as disobedience to God the Father. What we have now are troubles. As the old song said it, “We have troubles now in windy city.” Sin has fallen upon the goodness of God’s creation as we have two sons who refuse to live as if they knew the Will of God.

The boys are told, “If you do well, will you not be accepted? And if you do not do well, sin is lurking at the door; its desire is for you, but you must master it.” This is the first time the word sin is found in the Bible. Sin is depicted as a predatory animal just waiting to attack any who come close while living as missing the mark. The mark is the standard of perfection as established by God and lived by God’s Son, Jesus. It is this standard which is difficult live up to that provides the cause and effect of the atoning sacrifice of Jesus. Sin is living in disobedience to the ways of God our Maker. But fear not for we have the blood of Christ washing away the stain of our sin. Halleluiah!

Gracious Loving God, the closer we live in Christ the more wonderful is Your acceptance of us, seen in the eternal forgiveness of Your eternal love and care. Amen.