In Faith We Live and Speak! 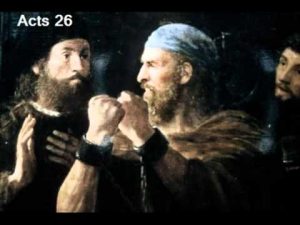 Agrippa said to Paul, “You have permission to speak for yourself.” Acts 26:1

What a way to come to the end of The Book of Acts. Luke, as we now know, has Paul saying, “PAUL REPLIED, I PRAY TO GOD THAT NOT ONLY YOU BUT ALL WHO ARE LISTENING TO ME TODAY MIGHT BECOME SUCH AS I AM.” What a prayer! Do you suppose Paul may have had you and me in mind when he said such a powerful thought as he did years ago before King Agrippa?

Paul is credited as saying that Jesus God’s eternal Son who died on the cross now lives! God our Father not only proclaims that Paul himself shall live but everyone who hears and believes that Jesus Christ lives today, shall live in Him! God our Father has used many to share the Good News that as Jesus the Christ lives, so all who believe will also live in the Resurrection.

Where do you suppose Paul received such an eternal thought to share and to pass on for all eternity? The Book of Acts provides the answer.  Paul is to be the witness for all who follow that if you believe, you will be received into God’s eternal Kingdom in heaven. Death has lost its sting. The beauty and wonder found here in The Book of Acts is that, like Paul, we too have received the commission to serve Jesus Christ our Lord. As Paul learned, so we too can learn, and as we learn, all things become new and different.

Think about the fact that Paul did not simply come to know about Christ, he knew Christ. This can also become a part of our faith journey. Unless the risen Christ becomes part of our lives as a moving force, even if we know all the facts of the resurrection and can tell the whole story by memory, it does not empower us. The Resurrection will not become the force to motivate and empower us to live, to think, to share The Good News for the whole world, unless we not only tell the story, we live the story.

Heavenly Father, because He lives I can face tomorrow, and even more, I can not only tell the story, I can live it! May Christ’s Spirit always live in me, so that as I live, others too may live. In Jesus we pray. Amen.