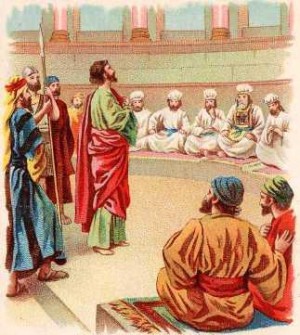 The story of Stephen, the first martyr in the Christian faith, is a powerful story. He served God so obediently, and even as he died, he was an example of faithfulness. Stephen was also a faithful interpreter of the biblical story.

I love the biblical books of Genesis and Exodus and the detailed account that they give of God’s dealings with God’s people. But these scores of pages, covering centuries of interactions, go into such marvelous detail, that I might tend to miss the overall story. Enter Stephen. Stephen’s sermon in chapter 7 of Acts is an incredible summary of the Genesis and Exodus narratives. Like Cliff’s Notes when I was in high school and college, “Stephen’s Summary” can help me get an overview/outline of a significant piece of literature, and also to make sure that I make note of the most important details. (The following few paragraphs seem long, until you realize that they summarize over 50 chapters of material)

…The God of glory appeared to our ancestor Abraham when he was in Mesopotamia, before he lived in Haran, and said to him, ‘Leave your country and your relatives and go to the land that I will show you.’ Then he left the country of the Chaldeans and settled in Haran. After his father died, God had him move from there to this country in which you are now living.He did not give him any of it as a heritage, not even a foot’s length, but promised to give it to him as his possession and to his descendants after him, even though he had no child. And God spoke in these terms, that his descendants would be resident aliens in a country belonging to others, who would enslave them and mistreat them during four hundred years. ‘But I will judge the nation that they serve,’ said God, ‘and after that they shall come out and worship me in this place.’ Then he gave him the covenant of circumcision. And so Abraham became the father of Isaac and circumcised him on the eighth day; and Isaac became the father of Jacob, and Jacob of the twelve patriarchs.

“The patriarchs, jealous of Joseph, sold him into Egypt; but God was with him, and rescued him from all his afflictions, and enabled him to win favor and to show wisdom when he stood before Pharaoh, king of Egypt, who appointed him ruler over Egypt and over all his household. Now there came a famine throughout Egypt and Canaan, and great suffering, and our ancestors could find no food. But when Jacob heard that there was grain in Egypt, he sent our ancestors there on their first visit. On the second visit Joseph made himself known to his brothers, and Joseph’s family became known to Pharaoh. Then Joseph sent and invited his father Jacob and all his relatives to come to him, seventy-five in all; so Jacob went down to Egypt. He himself died there as well as our ancestors, and their bodies were brought back to Shechem and laid in the tomb that Abraham had bought for a sum of silver from the sons of Hamor in Shechem.

“But as the time drew near for the fulfillment of the promise that God had made to Abraham, our people in Egypt increased and multiplied until another king who had not known Joseph ruled over Egypt. He dealt craftily with our race and forced our ancestors to abandon their infants so that they would die. At this time Moses was born, and he was beautiful before God. For three months he was brought up in his father’s house; and when he was abandoned, Pharaoh’s daughter adopted him and brought him up as her own son. So Moses was instructed in all the wisdom of the Egyptians and was powerful in his words and deeds.

“When he was forty years old, it came into his heart to visit his relatives, the Israelites. When he saw one of them being wronged, he defended the oppressed man and avenged him by striking down the Egyptian. He supposed that his kinsfolk would understand that God through him was rescuing them, but they did not understand. The next day he came to some of them as they were quarreling and tried to reconcile them, saying, ‘Men, you are brothers; why do you wrong each other?’ But the man who was wronging his neighbor pushed Moses aside, saying, ‘Who made you a ruler and a judge over us? Do you want to kill me as you killed the Egyptian yesterday?’ When he heard this, Moses fled and became a resident alien in the land of Midian. There he became the father of two sons.

“Now when forty years had passed, an angel appeared to him in the wilderness of Mount Sinai, in the flame of a burning bush. When Moses saw it, he was amazed at the sight; and as he approached to look, there came the voice of the Lord: ‘I am the God of your ancestors, the God of Abraham, Isaac, and Jacob.’ Moses began to tremble and did not dare to look. Then the Lord said to him, ‘Take off the sandals from your feet, for the place where you are standing is holy ground. I have surely seen the mistreatment of my people who are in Egypt and have heard their groaning, and I have come down to rescue them. Come now, I will send you to Egypt.’ Acts 7:2-33

Stephen’s audience knew the stories to which he was referring, and as he compared the disobedient postscript of the ancient stories to the actions of the people to whom he spoke, they stoned him to death.

Before we look for the comparisons (flattering or not) in our own lives, we might first review the story. I love how Stephen boils it all down to a drama where God acts and the people respond. Reading these short paragraphs makes me want to go back to Genesis and Exodus and read for detail, making sure that the ancient story is my story of faith, too.

Make me an eager student of Your Word each day, Dear God. Show me how You continue to work in the midst of Your people as You have done from the beginning. Draw me into the story, through Jesus Christ my Lord and Savior. Amen.