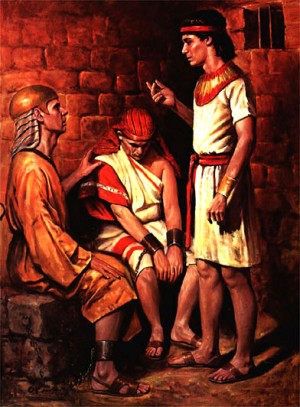 How then could I do this great wickedness and sin against God? Genesis 39:9c NRSV

Those well acquainted with the American musical theater will recognize the title of today’s devotion as the title of a song from the Broadway play and film, Annie. The title character is based on the old comic strip Little Orphan Annie. In the musical Annie and the other girls live in an orphanage managed by Miss Hannigan, who makes their young lives miserable by her mistreatment of them and the demands she makes upon them for cleaning and maintaining the place. They break into song by singing, It’s A Hard Knock Life.

That song could also have been put into the lips of Joseph. His hard knock life began when his brothers sold him into slavery to some Ishmaelites. They then transported the young man to Egypt and there they sold him to a man named Potiphar. Joseph did good work in Potiphar’s household and his owner rewarded him with more responsibilities until he was the manager of Potiphar’s house. Even though he was away from home and even though he was a slave, he was a very trusted one. Life was good again! The good looking Joseph attracted the attention of Potiphar’s beautiful wife and she made advances toward him. When he rebuffed her advances, she caught his garment and he fled. With her crocodile tears of being assaulted and this circumstantial evidence, his master, Potiphar, had just cause for having him imprisoned for bringing dishonor on his household. Joseph landed in jail. Another hard knock! Then Joseph found favor in the sight of the jailer and could it be that things were looking up again for Joseph? Could life be good once again? Yes! The Lord was with Joseph and showed him steadfast love.

Is not life for most of us something of a roller coaster ride? There are ups and downs. In between there are some smooth riding spots. It has been said, “That which does not destroy us only makes us stronger.” It is true! Even when we experience life as a series of hard knocks, it is comforting to know that God is with us and will show us His steadfast love. Often we can look back and attest as to how the challenges and obstacles we have faced have indeed made us stronger.

Dear God, thank You for being with us and showing us Your steadfast love when we experience life as a series of hard knocks. Help us trust You to bring us to brighter days so that we can see You have not failed or forsaken us and to see that we are stronger by having endured testing and trials. In the name of Jesus, we pray. Amen.