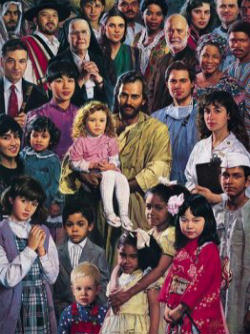 As many of you know one of my favorite musicals is Fiddler on the Roof. The leading character Tevye is a Russian Jew living in a small village known as Anatevka. Tevye is a dairy farmer and the world he lives in is changing. He struggles because tradition has been very important to him and there are so many attacks upon the comfortable world he has known. At the beginning of the film he sings a song entitled Tradition which identifies the familial roles of Papas, Mamas, sons, and daughters. One daughter will marry for love, another will marry without asking her father’s permission, and another daughter will marry outside her religious faith. Tevye struggles to make sense of the changes and strives to hold fast to traditions, but…

In Judaism and Christianity, the Ten Commandments are greatly esteemed. One of those commandments deals with familial relationships. The fifth commandment carries with it a promise. “Honor your father and your mother, that your days may be long in the land that the Lord your God is giving you.” We are taught to honor/obey/respect our parents.

In many ways, Tevye felt that his daughters were no longer respecting him. Some might say from the passage in Luke that Jesus was not honoring His mother by keeping her and Jesus’ brothers waiting while He was teaching. Jesus was not disrespectful of His mother, but He was a man and He had a ministry and it would not be a long one. Jesus re-defines and enlarges the concept of family.

Dear God, we thank You for our families and that as we hear Your word and do it; we too may be numbered among the family members of Jesus. We thank You for our family of faith and we ask that as we worship together, fellowship with one another, and join our hearts, hands, and voices that we may praise, thank, and serve You faithfully all of our days. In Christ’s name, we pray. Amen.