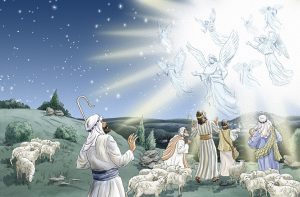 A favorite Christmas carol of many is the beloved Silent Night Holy Night. One image that comes to mind as we sing it is of the baby Jesus resting comfortably on the hay and snuggly in his swaddling clothes. Looking adoringly and tenderly at their infant are Mother Mary and “Father” Joseph. In comes the shepherds who were keeping watch over their flocks by night and the peaceful quiet is disturbed by the excited and exuberant shepherds who have come to recount what the angels told them. Now, for a moment just imagine that these shepherds came into Bethlehem town with their bleating sheep. Suddenly it is not quite as calm as we may have at first thought. Remember:

“Outside of Bethlehem, shepherds watched their sheep on the hills. Suddenly an angel appeared. The shepherds looked up at the bright night sky.

“Don’t be afraid,” the angel said. “I bring wonderful news. The child God promised was born tonight.” The shepherds listened in amazement. The twinkling stars seemed to echo each of the angel’s words.

The angel continued, “Go to Bethlehem! You will find the child lying in a bed of hay!”

Suddenly many angels filled the heavens. They sang together, ‘Glory to God in the highest. And peace to all people on earth.”

The shepherds would not have left their sheep alone … to wander off, to be attacked by wild animals or to get into trouble they could not get out of on their own. Most likely the sheep were left behind while the shepherds went to Bethlehem. This story suggests that Guardian Angels may have gotten their start with this assignment. Regardless, I think we are all thankful to have guardian angels watching over us.

O Lord, we thank You for Guardian Angels who watch over us and protect us. Most of all, we give thanks for the Baby Jesus, who grew up to be our Savior. In His name, we pray. Amen.