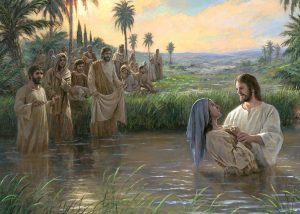 As we learned yesterday, John, son of Zechariah and Elizabeth and cousin of Jesus, acquired quite a reputation because not only was he known for his preaching, he was also recognized for baptizing. He baptized so many that he became known as John the Baptist.

“As John dipped his hand into the cold, clear water, he said, ‘Jesus was sent to be God’s Word! Jesus knows everything God wants to tell us’! As John baptized people he said, ‘Jesus will bring truth and grace to everyone on earth!’ He baptized people who wanted to follow Jesus and live the life God wanted them to live. Some people didn’t believe him, but John kept talking to everyone he met.”

John the Baptist did not give up on people, if at first, they did not respond to his message. He kept telling them about Jesus and that Jesus was/is God’s Word. He kept pointing to Jesus who was coming. He kept believing people would repent of their sins, be baptized and turn their lives around by living the life God wanted them to live.

O God, we give thanks for ministers, pastors and preachers who have helped us to understand Your Word and who have set examples for us by the way they live. Help each one of us to share the Good News of Jesus Christ and to remember that sometimes people need to hear the message, hear it again and even be reminded of what they have already heard before they accept it and believe it. In Jesus’ name, we pray. Amen.