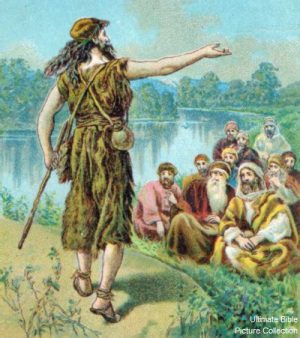 Centuries before there were televangelists, there was John the Baptist! Unlike those who often gained attention for their smartly tailored suits, John the Baptist was noticed because he was not in style. Instead of linen or wool, he wore a camel hair one-piece that was cinched by a leather belt. His diet consisted of locusts and wild honey. John had lots of “bad hair” days because he shunned the barber.

God, who does not judge by the outward appearance but by the heart, knew John was a good man and God had a special job for him. John would be the forerunner of Jesus and would serve to prepare the people for Jesus’ coming and His teachings.

When he taught people, John stood by the river and yelled out, “Hey! All of you! Tell God you’re sorry for your sins! Turn your life around and act in ways that are good and honest!”

Then he would turn to another group and shout, “Are you listening?! This is important! Jesus is coming! He is the Messiah! He will save all of us! Day after day.,” John continued preaching, teaching, and crying out so people would listen.

Many people came to hear what John had to say about Jesus. There were rich people and poor people, honest and dishonest people, nice and not-so-nice people.

Just as later with Jesus, there were people who heard and heeded John’s words and others who rejected him and them. Many did believe and followed their repentance with being baptized by John in the Jordan River. John became known as John the Baptist as he taught and baptized. He did a good job preparing people to receive Jesus and His teachings which were for everyone.

O God, it is clear that some people prefer hearing the Gospel forcefully proclaimed while others react better to a gentle telling. The important thing is that we have eyes to see and we really see, and ears to hear so that we truly listen … not allowing the message to go in one ear and out the other. Help us always to share genuinely ourselves and the Good News of Jesus Christ in ways that are comfortable to us. In His name, we pray. Amen.