Jonah and the Big Fish 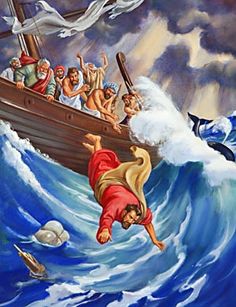 In school we were taught the three R’s. They were reading, writing and ‘rithmetic.

One day, God spoke to Jonah and told him that He wanted Jonah to go to Nineveh , to tell the people that He did not like the way they were living and to admonish them to repent and shape up. Jonah was reluctant to go. In fact, he did not want to go so much that he went in the opposite direction. He boarded a ship. Jonah thought that God would never know. Jonah was rebellious … not doing what God had bidden him to do and by going in the opposite direction.

But God did know, and God was not pleased with Jonah! The smooth sailing that lulled the reluctant prophet to sleep quickly changed as a storm came up and the passengers and crew were fearing that the ship would capsize. They began tossing cargo overboard, but the sea continued to rage.

“The sailors worried. ‘What’s going on?’ They woke Jonah up. “God is mad at me for not listening,” Jonah said, “so throw me overboard!” And they did! Suddenly the sea was calm again. Look out Jonah! Here comes a BIG fish! Gulp, gulp, gulp. The fish swallowed Jonah, and Jonah sat inside the dark, smelly fish for three days and three nights. Jonah prayed, “Help me God! I’m sorry. Finally, the fish spit Jonah out on the beach.”

Jonah was repentant. He told God he was sorry for disobeying. He then went to Nineveh and told the people what God had said. They too were repentant and changed their ways. God was pleased that His prophet and the Ninevites were obedient.

O God, we may not always like what You ask us to do. We may sometimes take our time in responding or may do the exact opposite of what You ask. Forgive our rebelliousness. Help us to live according to Your commandments knowing that we will be happy when we make You happy. In the name of Your obedient Son and our Savior, we pray. Amen.