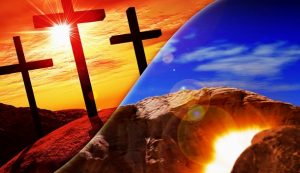 We don’t tell biblical stories just to entertain. We can tell them to explain.

Most people I have met, regardless of their age, like the story of Jonah and the whale. We are intrigued by the actions of this man of God. We are captivated by how God would speak to a fish and a worm to get things done. We listen to the story and can repeat many of the details.

Knowing this, Jesus used that well-know event to talk about something less-well-known that was ahead on the horizon – his death and resurrection.

Jesus’ death and resurrection would prove that he had been telling the truth, and that he truly was the Son of God. It was the sign that sealed so many of his promises.

Many of the Jewish religious leaders didn’t believe, even when they saw this sign. We have the chance to believe that just like with Jonah and a whale, a cross and an empty tomb came to change us and the world.

God, let me read, believe, and live your Word today, as I follow the resurrected Jesus, my Savior and Lord. Amen.