Knowing When You Have Arrived 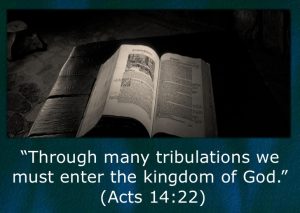 What will signal the fact that you have made it to the top? For students, it may be graduation day. For professionals, it may be the corner office. In the general arena of life, it may be that moment when we feel that we have accomplished what we set out to do, and when all or most of the goals we had in life have been achieved, and we are on easy street.

That isn’t how Paul thought that he had arrived. Success for him was in obedience to Christ, and sharing what he knew about God in Jesus Christ when the message was popular or unpopular.

Then they stoned Paul and dragged him out of the city, supposing that he was dead. But when the disciples surrounded him, he got up and went into the city. The next day he went on with Barnabas to Derbe.

After they had proclaimed the good news to that city and had made many disciples, they returned to Lystra, then on to Iconium and Antioch. There they strengthened the souls of the disciples and encouraged them to continue in the faith, saying, “It is through many persecutions that we must enter the kingdom of God.” And after they had appointed elders for them in each church, with prayer and fasting they entrusted them to the Lord in whom they had come to believe. (Acts 14:19-23)

As Paul was blazing trails in the missionary field, God blessed his work with some incredible events. There were people whose lives were changed, physically and spiritually, as they responded to Paul’s sharing of the gospel. But being faithful to God’s call to service didn’t mean that Paul had a charmed life on easy street. He was stoned by a crowd, more than once, pummeled with rocks to the point that people left him for dead. And when he got the strength to move on, he told the other followers of Christ that “it is through many persecutions that we enter the kingdom of God.”

How do you know that you’ve arrived as a follower of Jesus? It may be when God does incredible things for others through you. It may be when your soul is filled with the peace that passes understanding. And it may be when the going is a little tougher because you choose to follow Christ in spite of the cost.

Prayer (This prayer was first uttered by Ignatius Loyola, a catholic priest who founded the Jesuit order)

Teach us, good Lord, to serve thee as deservest; to give and not count the cost; to fight and not to heed the wounds; to toil and not seek for rest; to labour and not to ask for any reward, save that of knowing that we do they will through Jesus Christ our Lord. Amen.