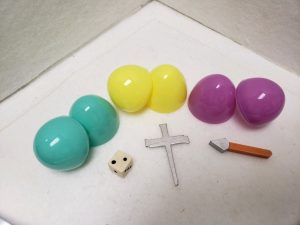 So they took Jesus; 17 and carrying the cross by himself, he went out to what is called The Place of the Skull, which in Hebrew[d] is called Golgotha. 18 There they crucified him, and with him two others, one on either side, with Jesus between them. 19 Pilate also had an inscription written and put on the cross. It read, “Jesus of Nazareth,[e] the King of the Jews.” 20 Many of the Jews read this inscription, because the place where Jesus was crucified was near the city; and it was written in Hebrew,[f] in Latin, and in Greek. 21 Then the chief priests of the Jews said to Pilate, “Do not write, ‘The King of the Jews,’ but, ‘This man said, I am King of the Jews.’” 22 Pilate answered, “What I have written I have written.” 23 When the soldiers had crucified Jesus, they took his clothes and divided them into four parts, one for each soldier. They also took his tunic; now the tunic was seamless, woven in one piece from the top. 24 So they said to one another, “Let us not tear it, but cast lots for it to see who will get it.” This was to fulfill what the scripture says,

“They divided my clothes among themselves,
and for my clothing they cast lots.”

25 And that is what the soldiers did.

28 After this, when Jesus knew that all was now finished, he said (in order to fulfill the scripture), “I am thirsty.” 29 A jar full of sour wine was standing there. So they put a sponge full of the wine on a branch of hyssop and held it to his mouth. 30 When Jesus had received the wine, he said, “It is finished.” Then he bowed his head and gave up his spirit.

31 Since it was the day of Preparation, the Jews did not want the bodies left on the cross during the sabbath, especially because that sabbath was a day of great solemnity. So they asked Pilate to have the legs of the crucified men broken and the bodies removed. 32 Then the soldiers came and broke the legs of the first and of the other who had been crucified with him. 33 But when they came to Jesus and saw that he was already dead, they did not break his legs. 34 Instead, one of the soldiers pierced his side with a spear, and at once blood and water came out. 35 (He who saw this has testified so that you also may believe. His testimony is true, and he knows[g] that he tells the truth.) 36 These things occurred so that the scripture might be fulfilled, “None of his bones shall be broken.” 37 And again another passage of scripture says, “They will look on the one whom they have pierced.”

On this Good Friday, let me pause to appreciate how your life and death, Dear Jesus, fulfilled the scriptures. Let my response of faithfulness and surrender fulfill God’s plan for my life. In your precious name I pray. Amen.