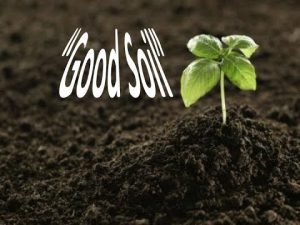 Where some of the parables of Jesus are one liners, other parabolic stories told by our Lord are quite detailed. One such story is known as “The Parable of the Sower.”

As we listen to the story, we might start asking where we fit. Are we living along the path? Are we hard-headed (rock hard) followers, who hear and then don’t let the Word take root? Are we good soil for faithfulness, and are we seeing the Word of God produce benefits in us?

As the disciples of Jesus were going through a similar thought process, our Lord gave them some instructions on listening to parables like this one.

With more clarity, what are we doing with the Word that has come to us in Jesus? Have we let the evil one snatch it away? Are we falling away during trouble? Are we letting the cares of the world or the lure of wealth choke the Word? Or is God’s Word bearing good fruit in our faithful lives?

Good questions. What is your answer?

God, I thank You for Your loving and gracious Word. Let me live today so that it might take root in my life, bearing good fruit for me and those I encounter, as I live as a disciple of my Lord and Savior Jesus. Amen.