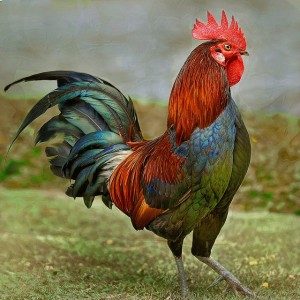 My sign of the Zodiac is “Leo,” the lion. Now, I do not consult my horoscope, but I have noticed that people born between July 23rd and August 22nd , often share certain personality characteristics, some of which are described as: magnanimous, warm, caring, authoritative, hospitable, generous, etc. I have always liked lions and the regal way they carry themselves … taking deliberate steps and sure strides.

Roosters have also fascinated me. They can be among the most colorful animals in the barnyard. I enjoy watching them strut. It is like they are on parade and looking at all of the other animals to bow down to them. If their plumage and strutting don’t garner enough attention, then they can always resort to crowing!

The only monarch of Great Britain that I have known is Queen Elizabeth II, who ascended the throne before I was born. She has always been very regal. I have enjoyed watching her among her subjects … walking along attired in one of her many beautiful hats and always on her arm … a handbag! (Have you ever wondered what she carries in her purse? I have!) Though I hope Her Majesty continues to reign, I hope I will live to see William, the Duke of Cambridge ascend to the throne. It will be interesting to see how he carries himself as King, grandson of the longest reigning monarch in English history, Elizabeth II, and son of the very popular People’s Princess, Diana.

All of these have a stately stride! The one I have left out is the “he-goat” and I can’t get out of my head the emblems on Dodge trucks, ram’s head, and of the vehicles being “ram tough.” In documentaries I have seen big horn sheep butting heads with their horns clashing. The other image in my mind is of a bighorn sheep perched on a rocky mountaintop surveying the surrounding territory. Majestic in appearance, but I still fail to see the ram demonstrating a stately gait or stately stride.

Throughout Chapter 30 beginning with verse 18 and continuing to the end of the chapter, it seems that we are invited to pause from our busy-ness, to take in the beauty and the wonder of the world and to see what lessons can be learned or how things can be different or alike. Let us take some time this day to listen, watch, and learn.

O Lord, help us this day to listen, watch, and learn as we survey the world You created. Help us also to carry ourselves, remembering that we are brothers and sisters of Christ and that we are called to be His faithful disciples. In Christ’s name, we pray. Amen.