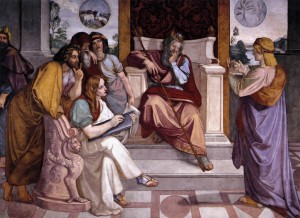 Genesis 41 starts out with dreams, just like Genesis 40. This time it is the Pharaoh who has two similar dreams. One dream has seven fat, sassy cows swallowed up by seven ugly, gaunt cows. The second dream has seven lush heads of grain replaced by seven thin, scorched heads of grain. Neither the Pharaoh nor his ‘magicians’ understand these two dreams. In comes the cupbearer, remember the man who was in prison with Joseph and forgot all about Joseph when he was released from prison? Now the cupbearer remembers Joseph and how Joseph interpreted his dream while in prison. The cupbearer shares this with the Pharaoh and the Pharaoh sends for Joseph to interpret his dreams.

Pharaoh said to Joseph, “I had a dream, and no one can interpret it. But I have heard it said of you that when you hear a dream you can interpret it.” “I cannot do it,” Joseph replied to Pharaoh, “but God will give Pharaoh the answer he desires.” Genesis 41: 15-16

I am in awe of Joseph’s response, he takes no credit and even after everything Joseph has been through, he remains faithful to God and continues to serve in God’s name.

I think the second part of this story is a healthy reminder that even though we are children of God, we still need to live responsibly. Joseph interpreted the dreams as a warning of seven years of abundance that would be followed by seven years of drought and famine. The Pharaoh puts Joseph in charge of everything so Joseph carefully stores supplies for the years of famine that he knows are coming.

When the famine had spread over the whole country, Joseph opened all the storehouses and sold grain to the Egyptians for the famine was severe throughout Egypt. Genesis 41:56

This is why we go to school, have insurance, save for retirement, and support our missions for those less fortunate. We take responsibility for ourselves and others while we walk with God.

Dear Lord, help us to live responsibly as children of God.