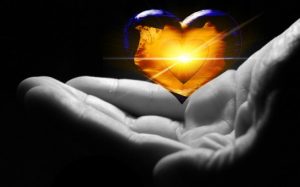 The parable that Dr. Harvey and I assigned to today’s devotion has been called many things: The Parable of …. The Lost Son – The Prodigal Son – The Prodigal and His Brother – A Man and His Two Sons – The Extravagantly Loving Father.

As we ponder this parable on Valentine’s Day, I hope we will read it as a description of how God loves each of us REGARDLESS of how we treat God.

“Now his elder son was in the field; and when he came and approached the house, he heard music and dancing. He called one of the slaves and asked what was going on. He replied, ‘Your brother has come, and your father has killed the fatted calf, because he has got him back safe and sound.’ Then he became angry and refused to go in. His father came out and began to plead with him. But he answered his father, ‘Listen! For all these years I have been working like a slave for you, and I have never disobeyed your command; yet you have never given me even a young goat so that I might celebrate with my friends. But when this son of yours came back, who has devoured your property with prostitutes, you killed the fatted calf for him!’ Then the father said to him, ‘Son, you are always with me, and all that is mine is yours. But we had to celebrate and rejoice, because this brother of yours was dead and has come to life; he was lost and has been found.’
Luke 15:11-32

Our God loves us. Period. (Thanks be to God!)

Dear God, on this day when people think and talk of love, let me revel in the love that You showed us by making us, claiming us, and saving us in Jesus Christ, my Lord and Savior. Amen.