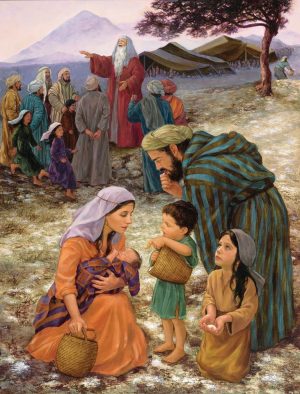 Now let’s see if we remember the Israelites story up until now. They were oppressed and suffering in Egypt, but God heard their cries and delivered them with Moses as their guide. They saw the Egyptians “hot on their heels” and God saw what was happening. God instructed Moses to raise his staff and part the Red Sea. The Israelites crossed to the other side and the waters drowned Pharaoh’s army who pursued them. God again protected and saved them.

The Israelites were safe on the other side, but they were still discontented, and they grumbled and complained. “Traveling was hard and tiring. Along the way the people became hungry. They complained to Moses. “I’m so hungry!” one boy cried. “I wish we could go back to Egypt!” whined a little girl. God knew what the people needed before any of this! God had seen what was happening. God heard their complaining, cries and grumbling. God provided quail when they hungered for meat, manna when they hungered for bread, and water to slake their thirst.

O God, when we are prone to complain, grumble and whine, remind us of Your loving care. When we resort to those actions, forgive us. Help us to trust that You know our needs and You will provide. In Christ’s name, we pray. Amen.