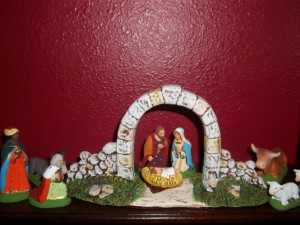 Clare McAdams’ is partial to miniature (2 ½ inch) figured nativity sets and this one of French origin is one of her favorites.

Clare shared a folder which gives some of the history regarding these figures. “For over 200 years, artisans in the south of France have been making clay figures known as santons (little saints) to the delight of old and young alike. As an essential part of the Provencal Christmas celebration and as ambassadors of the traditions and legends of Provence, they are cherished around the world.

The Santons of today are children of the French Revolution. After 1789, when churches were closed, people were no longer able to visit their beloved crèches. To fill this void a Marseille artist, Jean-Louis Lagnel, made the first santons from the rich clay of surrounding hills and they were received into the hearts and homes of those who saw them.

Along with the biblical figures, the characters he created were based on the people he knew: farmers, tradesmen and villagers who gathered around the Christ child bearing gifts. There’s the Tambourinaire, who announces the birth with his music, the woman carrying a black chicken to make a broth for the new mother; and the shepherd with the lamb. Over the years inspired by the folklore and traditional Provencal life, new characters were born, their stories told and retold to each generation.”

Clare displays her santons in a mahogany curio shelf in her dining room all year long. A friend started her off with the collection that has now become a family heirloom, which she intends to pass on. There is a French shop in Blowing Rock, North Carolina that imports these santons from France. Clare writes, “Punkin Smith gave me a woman with a pumpkin on her head. Patti Herndon gave me a woman holding a baby. I love my Francis of Assisi,” (Editor’s note: who is credited with creating the first nativity scene.)

Thought for the Day: Have you ever worked with Playdough? If you liked your creation, then you could let it dry and harden. If you did not like what you made, you could compress the clay and start forming it again until you made something you liked.

Prayer: Gracious God, we thank You for skilled artisans, especially potters who work with clay and fashion useful vessels and objects of art. We thank You for Christmas and that the news of Jesus’ birth was first given to poor shepherds. Shape and mold us for Your service that we may glorify You, for Christ’s sake. Amen.