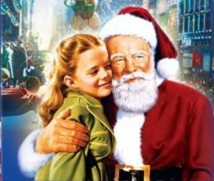 “The Spirit of the Lord is upon me, because he has anointed me to bring good news to the poor. He has sent me to proclaim release to the captives and recovery of sight to the blind, to let the oppressed go free, to proclaim the year of the Lord’s favor.” Luke 4:18-19 (NRSV)

Miracle on 34th Street (1947) has been a holiday tradition in my life for almost 30 years. When I was young, VHS and DVD formats of the movie were nonexistent. I would begin early searching the TV program listings to try and catch it on cable. Even through college, my roommates would laugh (but inevitably join me) as I watched this classic. With the recent proliferation of DVD copies, the tradition has solidified into a family movie night at our house sometime during the long Thanksgiving weekend; a warm friendly visit with my old friends Kris, Susan, Fred Gaily and Judge Harper.

With its ties to Macy’s department store, Santa Claus, and gift giving, much of the religious undertone of Miracle on 34th Street may be lost to the commercialism of the season. However, I think this special film is perfect for setting the tone of the holidays. It begins on Thanksgiving Day and ends Christmas morning. It includes Santa Claus, lots of holiday shopping, and plenty of characters in varying degrees of “belief”. The story culminates with everyone getting what they want from Santa. It’s a microcosm of the world we live in six weeks of every year.

What makes this sentimental film so perfect for Christians anticipating the advent? It’s not that it tells the story of the birth of Christ. The real power is that Miracle on 34th Street anticipates Jesus’ life leading up to the cross. The action of the movie swirls around one man’s attempt to have others believe he is not a mad man who thinks he is a supernatural being; rather he is actually that being. Like Jesus, Kris(t) performs many miracles as he navigates the modern world. He influences enemies to love one another (Macy and Gimbel), he heals the sick (by providing an x-ray machine to the rest home), and provides the gift of “sight” to little Susan Walker and her mom. These “miracles” are some of many in the movie that Kris uses to foster goodwill and inspire the people he meets to believe in him. By the end of the film, those that do believe are granted the gift of love, family, and a mansion prepared by Kris himself.

Ever Present Lord, heavenly miracles surround us every single day. Help us to stop – ponder – and take each and everyone of them in. We thank You that You can use ALL things for Your glory. In Jesus’ name we pray. Amen.