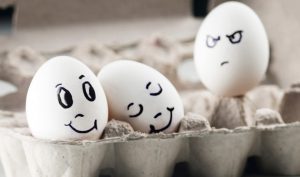 While they were at Hazeroth, Miriam and Aaron spoke against Moses because of the Cushite woman whom he had married (for he indeed had married a Cushite woman) and they said, “Has the Lord spoken only through Moses? Has he not spoken through us also?” And the Lord heard it.
Numbers 12:1—2

In the previous devotional on Miriam, we discovered that she was a good sister. She kept watch over baby Moses in the basket and then she summoned their mother to come and serve as the nurse for her brother Moses. In our reading from Exodus today, Miriam follows in the footsteps of her baby bother Moses in praising God  for delivering the Israelites from the Egyptians, who were in hot pursuit of them. Pharaoh’s army was chasing the Hebrews when they found themselves caught between their enemy and the Red Sea. God instructed Moses as to what he should do so that God’s people could cross the sea on dry land. Moses stretched out his hands, the waters of the Red Sea parted and the Hebrews crossed on dry land to the other side.

Then Moses let down his hands and the waters of the Red Sea toppled in on the Egyptians, drowning them and their horses. After Moses’ lengthy song celebrating their victory over their enemy, Miriam joined in. She took a tambourine in her hand and all the women went out after her with tambourines and with dancing. Miriam sang, “Sing to the Lord, for He has triumphed gloriously; horse and rider He has thrown into the sea.”

By the time we come to the Numbers reading, Miriam has grown a little tired of submitting to her baby brother and she became possessed by the green eyed monster of jealousy. The telling remarks are her questions: “Has the Lord spoken only through Moses? Has He not spoken through us also?” The “us “is: Miriam and Aaron.

We are told Moses was humble. We see that Miriam and Aaron are puffed up with pride. The Lord calls all three siblings to come out to the tent of meeting. The Lord approves of Moses, but His anger is kindled against Miriam. Upon the Lord’s departure, Miriam became leprous … as white as snow. Aaron intercedes for Miriam, asking that she not be punished for their foolish sin. Moses then interceded for Miriam, but the Lord would not relent, so that Miriam was ostracized from the camp for seven days. Once that time was completed, she was healed of her leprosy and restored to the community. Then together the people would continue on their wilderness journey.

O God, each of us is a mixed bag of good and bad.  Forgive us when we have been jealous and resentful.  Help us to appreciate the gifts You have given us and to use them for Your glory and honor.  In Christ’s name, we pray. Amen.