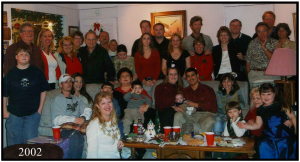 As I write this, it is just after Christmas, 2017. I’ve spent some time reflecting on our wonderful family Christmas gatherings over the years and how they have changed yet remained the same.

As a child, Christmas family gatherings were traditionally at my paternal grandparents. They owned a motel in Mt. Dora called The Highlander. Going there was always a blast, hanging out with cousins, running around the grounds, playing in the basement, and maybe even one of the motel rooms. Grandma & grandpa always had a huge, real tree in their lobby/living room. As a child we just knew it had to be 20 feet. I’m guessing now it was probable more like 8 or 9 feet. They also had a dining table large enough to seat all the adults and most of the older kids. And then, of course there was the “kid’s’” table. A lot of carrying on and laughing happened there. Our dinners were always very traditional with turkey, dressing, candied yams, French’s green bean casserole, canned jellied cranberry sauce, and so much more. My favorite was grandma’s banana nut bread. They eventually sold the motel and move in to a large house. We still gathered at their place, but missed the motel.

After my grandparents were gone, we had to come up with a new tradition. Christmas would be celebrated as a family every other year, and Thanksgiving the opposite year at my mom and step-father’s on Lake Jesse. Mom & Hank made the turkey & ham. Everyone else would bring the appetizers, sides, bread, and desserts. Time was spent visiting, eating, playing volley ball, and maybe even boating. For gifts we would all get something for the younger ones. For the adults we would play the white elephant game. In 2003 we counted 29 family members in all spanning four generations.

After mom & Hank sold their house and moved in to a condo we had to, again, come up with a new plan. It was then my generation’s time to host. Since then we have taken turns hosting. Our crowd has gotten a little smaller. We always have a great time. I leave with that warm fuzzy feeling I get after spending time with my family. There’s also nothing like seeing my mom’s face as she enjoys being surrounded by her “grown-up” kids.