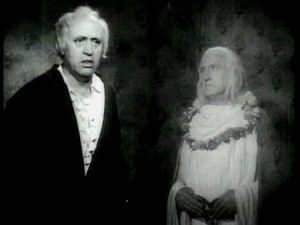 NOTE: For our devotions from Friday December 29 through Wednesday January 3, I have chosen to write some devotionals you might just re-read in the proposed Advent Devotional 2018: My Favorite “Christmas” Things. These devotionals deal with different topic and are being used to set your own “creative juices” flowing that you might make a submission to the Advent Devotional 2018.

One of My Favorite “Christmas” Things is Charles Dickens’ A Christmas Carol. Over the years there have been a number of stage and film productions of Dickens’ classic novella. My personal favorite is an English black and white film version with Alastair Sim in the role of Ebenezer Scrooge. My next favorite version of A Christmas Carol is the musical version entitled “Scrooge” with Albert Finney in the title role.

I have friends who believe the Reginald Owen version is the best. Others are devotees of the Muppets Christmas Carol and still others of Mr. Magoo. There have been other productions with the late George C. Scott, Patrick Stewart and Jim Carrey portraying Scrooge.

Something positive can be said about all the productions I have seen, but I still prefer the black and white 1951 film and the musical “Scrooge.” I know many of the lines and the songs and I can join in saying or singing them while viewing. Somehow it does my heart good to see these films and I never consider it a waste of my time. As I own copies of both, I can see them whenever I want to do so during the season. In my younger days I used to view the film on Christmas Eve, but after 2 candlelight services, I usually view it some other time. Rest assured I will take time during the holidays to hear Scrooge say: “I will honor Christmas in my heart, and try to keep it all the year.” He will inspire me to reaffirm my own attempt to keep Christmas the remaining 364 days of the year.