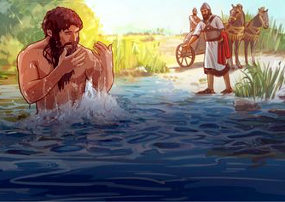 Our parents or other relatives will tell us that we are special, and we are special! The problem begins when we believe that we are so special that we deserve special or preferential treatment. Naaman was a big, strong, and important man in his country.

Naaman was not so special that he was immune to diseases that raged at that time. Naaman had leprosy, a painful and ugly disease producing sores on the body that would not go away.

An Israelite girl served Naaman, who commanded the army of Aram. The Israelite girl knew of the prophet Elisha living in her country who could heal Naaman of his leprosy. Naaman asked his king for permission to go and see Elisha.

Having heard that Naaman was on his way, Elisha sent word to Naaman. His instructions were to go wash in the river seven times to be healed of his leprosy. Naaman expected a private audience with Elisha. He thought the prescription was bordering on folk medicine. If Naaman only needed to bathe in a river seven times, there were many wider and deeper rivers in his own country that would surpass Israel’s small river.

“Naaman was angry! ‘Why didn’t the prophet Elisha come here and heal me? I am an important man!’ he fumed. ‘I could wash in the rivers in my own country. What’ so special about this little river!” he demanded.”

The Israelite girl prevailed upon her master to do what Elisha had commanded. He tested the water by dipping his big toe in and later he went in fully. Finally, he dipped himself in the restorative waters seven times. Then Naaman looked at himself … the sores had healed and he no longer experienced pain. Naaman had been healed. He knew that God was all powerful. He went home praising and thanking God.

O God, we thank You that we are “special” in Your eyes. Free us from misunderstanding our specialness as deserving of preferential treatment. Help us to realize that miracle can occur even through small and seemingly insignificant things In Christ’s name, we pray. Amen.