No End to the Preaching 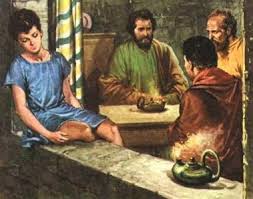 This is a story for the ages. Most preachers are intrigued by the tale. And many people who have been subjected to a sermon that seems to go on forever can identify with the story:

On the first day of the week, when we met to break bread, Pail was holding a discussion with them; since he intended to leave the next day, he continued until midnight. There were many lamps in the room upstairs where they were meeting. A young man named Eutychus, who was sitting in the window, began to sink off into a deep sleep while Paul still talked longer. Overcome by sleep, he fell to the ground three floors down and was picked up dead. But Paul went down, and bending over him took him up in his arms and said, “do not be alarmed, for his life is in him.” Then Paul went upstairs, and after he had broken bread and eaten, he continued to converse with them until dawn; then he left. Meanwhile they had taken the boy away alive and were not a little comforted. Acts 20:7-12

Paul was about to leave his friends in Troas, and he wanted to preach, and teach, and share the good news with them. As it sometimes happen, someone in the congregation fell asleep. As it seldom happens, this someone, a boy named Eutychus, fell out the window where he had been sitting and died. But Paul had more that he wanted to share with his brothers and sisters in Christ, and he wasn’t going to let a death during the preaching disrupt the evening. Paul went down three stories to where the boy had died, picked him up and in the process raised him from the dead, broke bread with the crowd (a Lukan phrase which often means celebrating the Lord’s Supper), and preached on until dawn.

Wow! What a story. What reality and what power in the lives of the believers.

There was for Paul. Maybe there is for us too.

God of life and life eternal, fill me with the good news is such a powerful way that I will want to learn it and share it always. In Jesus’ name I pray. Amen.