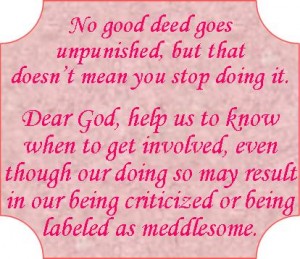 “Do you want to kill me as you killed the Egyptian yesterday? When he heard this, Moses fled and became a resident alien in the land of Midian.” Acts 7:28-29a (NRSV)

In Chapter 6 of the Acts of the Apostles, we read that Stephen was the first to be chosen as a deacon. He was not content to distribute food alone and he proved to be a powerful witness for Jesus Christ. He was accused of blasphemy and false witnesses were recruited to “beef up” the charges against him. He was brought before the Council to respond. The Council questioned him and Stephen began a long speech reciting Israel’s salvation history beginning with the Patriarch, Abraham.

In Chapter 7, beginning with verse 18, we read that the years of peace and prosperity that the Israelites had enjoyed in Egypt when Joseph was a ruler have passed. A new Pharaoh is in power who does not know of Joseph. He has seen what a valuable work force the Israelites constitute. To control the population of the Israelites, infant boys are killed, and yet one life through stealth is miraculously spared. That boy is Moses, born a Hebrew, and who is later adopted as an Egyptian prince. Moses increased in wisdom and stature and was “powerful in his words and deeds.”

At the age of 40 he visits his Israelite family. He sees one of his brethren being mistreated by an Egyptian. Moses defends the oppressed man and avenges him by striking down the Egyptian. Moses, in one sense sees himself as an Israelite dressed in Egyptian garb, while Israelites identify him solely as an Egyptian who struck down another Egyptian rather than rescuing them.

The next day Moses sees some of his Israelite brethren quarreling and he attempts to reconcile them. He asks them, “You are brothers, why do you wrong each other?” The one who was wronging his neighbor rebuffs Moses and inquires; “Who made you a ruler and a judge over us? Do you want to kill me as you killed the Egyptian yesterday?”

In the conflict between the Egyptian and the Israelite, Moses may have only wanted to restrain the Egyptian from harming or killing the Israelite. Moses may have accidentally killed the Egyptian … striking a harder blow than he expected. A day later, in the conflict between the two Israelites, Moses is seen as meddling in their affairs. Moses is also recognized as a killer and at least one of the Israelites knows what he did the day before. He wonders, “Is killing one of us the way Moses will attempt to resolve our conflict?” No good deed goes unpunished … Moses is an outlaw, having sided with the Israelites rather than remaining true to the Egyptians. No good deed goes unpunished … Moses has intervened between two Israelites who did not seek his arbitration and who question his reason for meddling and his right to do so. Moses, at least temporarily, has become a man without a country … wanted by the Egyptians and viewed as an outcast of the Israelites. He becomes a resident alien in the land of Midian.

O God, forgive us when we look the other way when we know what the right thing to say or do is. Grant us courage. Help us to know when to get involved, even though our doing so may result in our being criticized or being labeled as meddlesome. Grant us wisdom. Give us strength to endure when we do what is right and suffer for it. In Christ’s name, we pray. Amen.