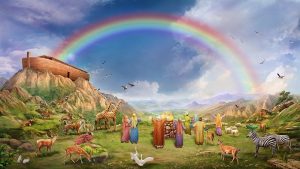 I have been fascinated by rainbows for as long as I can remember. I do not remember whether they first caught my attention by gazing at the sky following a spring shower or after having heard the wonderful story of Noah and the Ark. I know that I became more aware of them after having listened to the remarkable story in Sunday School.

“God painted a rainbow of brilliant red, orange, yellow, green, blue and violet across the sky and promised, ‘Never again will water flood the earth. Whenever you see the rainbow in the clouds, I will see it too, and I will remember,’”

Do you remember when people used to tie string around a finger to remind them of some promise? Often the tied string was a visual aid so that the person would not forget. The rainbow reminds us of God’s promise that water will never again flood the earth. It also reminds God of that promise too. A beautiful reminder for us and God of the blessed promise He made.