Not Just On Sundays! 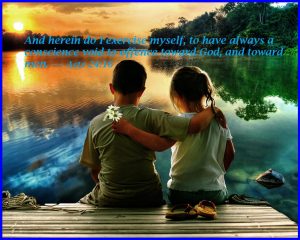 “I have a hope in God – a hope they themselves also accept – that there will be a resurrection of the righteous and unrighteous. Therefore I do my best always to have a clear conscience toward God and all people.” Acts 24:15-16 (NRSV)

Once again we find the Apostle Paul in the courtroom on trial … this time by Felix the governor. Ananias the high priest and some elders have engaged an attorney Tertullus to aid them in their case against Paul. Tertullus employs a good tactic to get the governor on the prosecution’s side by complimenting the governor before launching into presenting his evidence against Paul. Then the Jews joined in their charges.

After hearing their presentation, the governor motioned to Paul to present his defense. He cheerfully makes his defense while acknowledging that Felix has been a judge over their nation for some years. Paul tells Felix that he went to worship in the temple and that the Jews did not find him disputing with anyone there. They also did not find him stirring up the crowds in the synagogues or throughout the city. He asserts that the Jews cannot prove the charges that they are bringing against him. He cites that the Jews regard belonging to The Way as a sect, even though Paul maintains he worships the God of their ancestors … believing everything laid down by the law or written in the prophets. And then, we come to the verses serving as the text for this devotional.

Though Paul does not mention the last judgment in these verses he certainly alludes to it by citing the resurrection of the righteous and the unrighteous. The righteous and the unrighteous will appear before God to give an account of how they have lived their lives. In order that the charges against him may be reduced, Paul affirms, “Therefore I do my best always to have a clear conscience toward God and all people.” “Having a clear conscience toward God and all people,” suggests that Paul acknowledges and confesses his sins so that his sins of omission and commission that have not been acknowledged and confessed may be the only ones for which he will have to give an account at the last judgment. Inasmuch as he has acknowledged and confessed those sins toward God and all people in order to obtain a clear conscience, he does not have to hear those charges against him again. Those sins have been confessed and forgiven.

That process might be likened to court cases that have been adjudicated and then records have been sealed. By striving to have a clear conscience toward God and all people … by acknowledging and confessing our sins of omission and commission here and now, the only ones we may have to answer for at the last judgment are those which we have not acknowledged and confessed. Paul sets a good example for us to confess our sins not just on Sunday, but every day so that we may have a clear conscience toward God and all people. A daily prayer of confession could be the Jesus Prayer: “Lord Jesus Christ, Son of God, have mercy upon me, a sinner,” or the hymn text cited below: