Not to Be Noticed 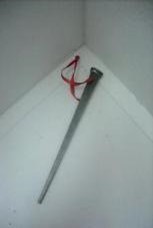 My favorite ornament is The Christmas Nail which hangs on a sturdy branch, without being noticed. The nail is known only to the home that hangs it. I acquired this ornament as a gift from my son, Douglas Heyer, in 2004, as a Christmas five day (when he was small, we gave 5 gifts, 5 days before Christmas, and we still carry on this tradition). This ornament is a favorite because only Christ could decorate the CHRIST tree for us, ornamented with nails such as this. This ornament hangs so as not to be noticed, it is known only to the house that hangs it.

A man named Simon, who was from Cyrene, was coming in from the country just then, and they forced him to carry Jesus’ cross. (Simon is the father of Alexander and Rufus.) And they brought Jesus to a place called Golgotha (which means Skull Hill). They offered him wine drugged with myrrh, but he refused it. Then they nailed him to the cross. They gambled for his clothes, throwing dice to decide who would get them.

Merciful Savior, You came to earth as a little tiny baby, so precious and innocent. Then You grew into man and gave us the ultimate gift, giving Your life for our sins. We praise You, thank You, and love You. In Your most holy name, Amen.