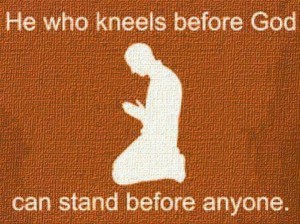 “The captain went with his Temple guards and arrested the apostles, but without violence, for they were afraid the people would stone them. Then they brought the apostles before the high council, where the high priest confronted them. “Didn’t we tell you never again to teach in this man’s name?” he demanded. “Instead, you have filled all Jerusalem with your teaching about him, and you want to make us responsible for his death!”

But Peter and the apostles replied,” We must obey God rather than any human authority. Acts 5:26-29

Once we realize that the only thing anyone on earth can take from us is our life we can begin to live like the apostles in the book of Acts. They knew the only thing that could be done to them was to kill their earthly bodies. God is in charge of our souls and eternity. That truth set them free and gave them the courage to speak God’s truth in boldness. They didn’t mean to offend, but they were held to a higher calling then simply not offending people. Their mission was God’s truth and they had blinders on for that task. Nothing could get them off course. Nothing could distract them from the mission God had placed before them. They spoke with urgency and love that we are called to model still today.

I pray that I have not become so accustomed to my comfortable, Western Christian faith that I fail to speak God’s truth and act boldly in his name because I must obey him rather than human authority. People were being healed in the name of Jesus Christ. Lives were being changed and all for the glory of God. Who could stop that good work just because they were told by human authorities to do so?

I used to think that God had only called me to one area and that was what I would stick to. It was easy for me to say that God hadn’t called me to a certain area just because it made me uncomfortable. The more I read through the book of Acts the more I realize God has called all of us to do many things in the church even if that makes us uncomfortable. The apostles were doing things in the name of Jesus I am certain they never though they would do. Heal the sick and casting out evil spirits is not something, I am certain, they ever though they would be called to and yet there they were doing just that. Just like the apostles, we are called to stretch our faith beyond what is comfortable – realizing that we aren’t doing these things on our own authority or abilities, but on God‘s authority.

Dear Heavenly Father, I pray in Your name that we would be bold here in earth while we are doing Your work. Help us to remember You have us securely in Your hands. All that You have called us to do You have well equipped us to do not on human authority, but on Your authority. In Jesus Name, Amen.