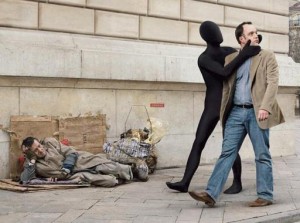 “When he [the lame man] saw Peter and John about to go into the temple, he asked them for alms.” Acts 3:3 (NRSV)

True confession: I love the scriptures!

Second true confession: This story, Acts 3:1-16, makes me feel very uncomfortable! It makes me feel guilty because of times when I have not responded to needy people, as did Peter and John in this story.

This story reminds me of people I have seen here and there seeking some financial assistance. I have encountered them in parking lots at Publix and Walgreen’s. I have seen them walking on the median between traffic lanes, sometimes holding a sign, giving a very brief summary of their plight or offering to work for food. Sometimes I have reached into my pocket and given some assistance.

Peter and John had neither silver nor gold to give as alms to the lame man. What they did have, they gave to him. Peter told him, “in the name of Jesus Christ of Nazareth, stand up and walk.” Peter took him by the hand and raised him up with his legs and ankles becoming strong. Should I encounter a similar situation, I don’t believe that I could utter those words and raise someone up from being lame to becoming ambulatory. I suppose the answer for me is to endeavor to offer more assistance when I can realizing that I cannot respond to everyone and to every worthwhile agency, cause and organization that solicits financial assistance from me. Then, I can at least feel a little less guilty when I have responded to some and prayed for all..

O Lord, forgive me when I have passed by neighbors in need and when I have resisted showing compassion. Help me to be more charitable. In Jesus’ name, I pray. Amen.