On the Christmas Treetop …a FINIAL! 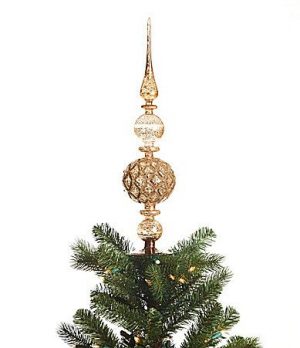 Why would one choose to place a finial on top of their Christmas tree? A finial by definition is an element that marks the top or the end of some object. Lamps often have finials, some as simple as a knob and others more decorative. The wooden balls at both ends of the banisters from the floor to the chancel level of our sanctuary are finials. One type of Christmas tree topper is a finial. Most often the ones that I have seen are made of different colors of mercury glass that have different sized round shapes ending with a point. As such the finial denotes the top of the Christmas tree. A finial may remind one of a steeple like ours that tops the tower of a church pointing toward heaven.

A finial could point to the direction from which Christ came. Cecil Frances Alexander in her hymn, Once in Royal David’s City, wrote, “He came down to earth from heaven who is God and Lord of all.” A finial could also point to the direction Jesus took after having spent forty days on earth following His resurrection. In Acts 1:9-11, we read, “When He had said this, as they were watching, He was lifted up, and a cloud took Him out of their sight. While He was going and they were gazing up toward heaven, suddenly two men in white robes stood by them. They said, Men of Galilee, why do you stand looking up toward heaven? This Jesus who has been taken up from you into heaven, will come in the same way as you saw Him go into heaven.”

A finial could remind one of the index finger pointing up as when one gets the attention of the students and the stresses the importance of what one has said. Remember what John the Baptist told his disciples as Jesus approached, “Here is the Lamb of God, who takes away the sin of the world!” (1:29)

No one chose to write a story about a finial as a Christmas tree topper. I have seen a number of finials in catalogs this season. They are most attractive when they coordinate with other mercury glass ornaments on the Christmas tree, but they are not as popular as angel or star as a tree topper.

Dear God, when the burdens of this world weigh us down, keep us looking up, for Our Savior and Lord Jesus Christ has come! Thank You, Lord. Amen.